Another Liberal Insults Our Country: “America Was Never Great”

Posted on August 17, 2018 by forloveofgodandcountry 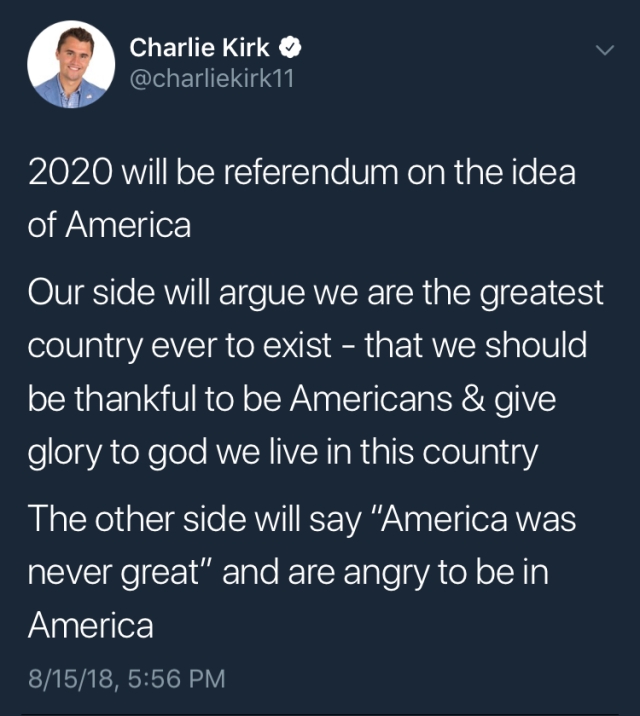 Speaking at the ceremony, he said: “We’re not going to make America great again because It was never that great. We have not reached greatness. We will reach greatness when every American is fully engaged.”  (Whatever that means. Apparently, he believes there is still widespread systemic discrimination against women in this country)

Luckily, his remarks were met with disagreement by his audience.

How sad that Cuomo’s extraordinary experience in the United States has left such a bad taste in his mouth and has caused him to despise the country. You would think that he would offer nothing but praise and gratitude. Andrew Cuomo is the son of Mario Cuomo. Both served the great state of New York as governor. Yet only one generation earlier, the Cuomo family was in Italy, living a meager existence. Mario Cuomo’s parents, Andrea and Immacolata, emigrated to the US – Andrea in 1926 and then Immacolata in 1927, both coming legally through Ellis Island.

Andrew graduated St. John’s University and then St. John’s Law School. He was married to a Kennedy. Mario’s other children are just as successful: a medical doctors, a movie producers, and a TV executive. They are married to America’s business elite.

And all this reminds Andrew Cuomo of the fact that America is not great nor ever was.

Tweeting about his comments, Cuomo continues to criticize President Trump’s plan to “Make America Great Again.”  He says it is a plan to take America backwards…   “We will not go back to discrimination, segregation, sexism, isolationism, racism or the KKK!” he tweeted.

He’s such a typical liberal, trying to manufacture systemic discrimination when none exists; trying to make victims out of people perfectly capable of taking care of themselves, trying to empower immorality over morality, and trying to deny taxpayers their hard-earned money because government can spend it better (on others, of course!).

“America was never that great.”  How insulting.  So many lives have been improved because of the United States. So many people have opportunities they never had in their former countries. So many served and died because of her greatness… so that her greatness could continue.

I’m happy to hear of the backlash against Andrew Cuomo. I’m happy it has stirred the patriotism in Americans. I think every able-minded person knows and believes what President Trump meant and continues to mean when he says “Make America Great Again.” America is Great when all Americans are able to reach their full potential – in their personal lives, in their careers, in the workplace, in the market, and in the global economy… when they can invent, manufacture, trade, build, develop technology, produce, provide services.…..

If liberals and progressives, and idiots like Andrew Cuomo would just get out of the way and shut up, the greatness will come.

And that would be true PROGRESS !!

I'm originally from New Jersey where I spent most of my life. I now live in North Carolina with my husband and 4 children. I'm an attorney
View all posts by forloveofgodandcountry →
This entry was posted in Uncategorized and tagged America was never great, Andrew Cuomo, Charlie Kirk, Diane Rufino. Bookmark the permalink.

1 Response to Another Liberal Insults Our Country: “America Was Never Great”