Another Brain Rotted Out by Trump Derangement Syndrome

Posted on August 24, 2018 by forloveofgodandcountry 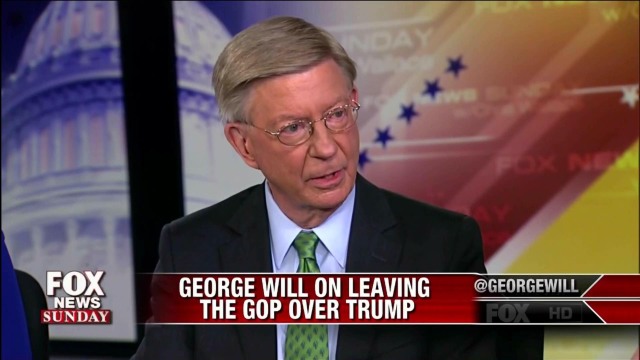 One month ago, on July 24, columnist and long-time (now “one-time”) conservative, George Will, was a guest on the MSNBC show, “Last Word,” and was asked to comment on the leaked, secretly-taped conversation between then- candidate Donald Trump and his then-attorney Michael Cohen.

This is how George Will answered:

“At the end of the day we have good decent Americans listening to not John Quincy Adams or Roosevelt or Eisenhower, but listening to this low-life from Queens talking about  paying off his low-lives from Playboy magazine.”

He added that he doesn’t believe that Americans are angry at Trump, but rather “are embarrassed and sad over the state of the country. And I think at the end of the day embarrassment and sadness are more explosive than anger.”    [George Will on “Last Call” –  https://www.youtube.com/watch?v=YT4Rgyicsw8 ]

Will is a Pulitzer-prize winning journalist with the Washington Journal.  But now he has left the planet. He joins Robert DeNiro, Meryl Streep, Jimmy Kimmel, Kathy Griffin, Rosie O’Donnell, Peter Fonda, Chelsea Handler, Michelle Wolf, Samantha Bee, Cher, Richard Gere, Sarah Silverman, Tom Hanks, Ashley Judd, Madonna, Barbra Streisand, John Legend, Jay-Z, Snoop Dog, Trevor Noah, Seth Meyers, Bruce Springsteen, Tom Morello, Jennifer Lawrence, Stephen King, Louis C.K., Miley Cyrus, George Clooney, Stephen Colbert, and others I can’t think of off the top of my head out in space, where they live in some delusional world that is conjured up on in their diseased minds and somehow strengthened by their living in the bubble they live in, devoid of reality.

The secretly-recorded conversation between Trump and his former personal attorney, Michael Cohen, has the two men apparently discussing buying the rights to former Playboy model Karen McDougal’s story about her alleged affair with Trump.

Here is some background about this ridiculous issue that no one cares about, except for CNN and other TDS-suffering liberals:

Karen McDougal, a Playboy model, alleged she had a 10-month affair with Donald Trump. She decided to tell – I mean, SELL – her story to the National Inquirer. The Trump campaign had previously denied any knowledge of the deal that Ms. McDougal made with American Media Inc., the publisher of the National Enquirer, for the rights to that story. (In the end, the National Enquirer had decided not to run the piece). Ms. McDougal then sued the publisher over the deal, wanting her rights to the story back, and the two parties settled earlier this year.

George Will’s comments on Tuesday night, like those of one infected and suffering from Trump Derangement Syndrome, were classic “I hate Trump more than I love my country” talk. He so thoroughly hates Trump that he left the Republican Party in 2016 and is now urging Republicans to do the same. He is also urging Democrats to get out the vote to get Republicans out of office.

He is your classic political nightmare – diseased and having access to the mainstream media.

George Will joins the rank of other diseased and demented liberals/progressives/Democrats who hate President Trump more than they love or care about their country. They come across as being so disappointed in the fact that America is great again….  Is it because of the person who has made it happen? Or, perhaps, is it because Americans are working again, or because there is no longer the huge sucking sound of American’s wealth being transferred to other countries, or because of the likelihood that a wall will be built to stop the constant flood of illegal alien criminals into our country, or because people who work for a living are finally getting enjoying more money in their paychecks rather than paying it to a government that will only spend it on someone else (who won’t provide for himself or his family or is here illegally), or because our military is strong again, or because Trump is dismantling the policies that Obama had put in place (mostly to benefit Muslims and Muslim countries), or is it because conservatives are finally pushing back against the progressive movement and moving their agenda forward?  Perhaps they hate Trump more than they love their country because he possesses so many qualities that they prize in their own leaders (like speaking without thinking, having affairs with women, at times even demeaning women, and often times in his earlier years and careers, acting without class) yet he is the most powerful leader of the conservative movement. Personally, I think the hatred has become toxic and epidemic because President Trump is succeeding in doing something that can fundamentally break the back of the Democratic Party (the vehicle through which the morally-bankrupt progressive left works) and that is by giving Americans – ALL Americans, especially minorities – employment and breaking their dependency on the government, the so-called slave owner that provides funding and support in return for one’s soul, dignity, freedom, and allegiance.

George Will’s rejection of Trump and the Republican Party is a sure sign of his suffering from Trump Derangement Syndrome. I will never understand the mindset of a person who, without the financial chains of the Democratic Party or a need for its endless support for more and more entitlement services, believes the party of Bill Clinton, the serial rapist and womanizer, and Hillary Clinton, who further victimized the victims and who broke many federal laws to enrich herself for the purposes of her 2016 presidential election, and the party of systemic institutionalized racism (known as “Affirmative Action”) as well as the party of “Special Protection” rather than “Equal Protection” for certain extreme minority groups, is preferable to a party headed by a man who actually sacrificed his wealth (and in fact, is now worth less), has the good conscience to honor his campaign promises, and who works tirelessly, unapologetically, and unwaveringly, for the good of the country and its people. I find it unconscionable for a wealthy man who lives a life of comfort (George Will) to change his political position to align with a party that has done nothing productive for the country or even for the people he takes for granted as his stable political base (except perhaps give them more “entitlements” that continues to be plundered from the families of those who the government says “makes enough”) over the party that has already been extremely successful in serving all Americans and in improving the status and security of the country, growing her wealth, and keeping that wealth here in the country rather than sending it abroad. What does it say about a person who expressly rejects the government policy objective “America first.”  That is the purpose of our federal government – to put America first. To make America great. To make America safe. All of these are the reasons Donald Trump ran for office, and all of these reasons are why he won.  Now that’s the hallmark of a great president.

The Trump Derangement Syndrome affects its hosts – liberals/progressives/the entertainment industry/the LGBT community/illegal immigrants and DACA recipients/feminazis/Democrats – like the rabies virus affects an infected raccoon. They act irrationally, crazed, desperate and violent, and making no sense for their species. A rabid racoon will attack a pit bull; a healthy raccoon knows better.  The symptoms we associate with rabies are those displayed in the end-stages of the infection. Can we assume the conduct of rabid liberals and progressives evidences the end stages of the Democratic Party?  The vile rhetoric of the liberal/progressive left and their outrageous and offensive, and yes, un-American conduct may, in fact, be the last desperate acts of a dying political party – one that no longer even remotely stands for American ideals or productive common-sense policies.

The liberal/progressive left (ie, the modern-day Democratic Party) is a political enemy of the United States and all she stands for and should they ever succeed to gain the power they desire, we will lose this country for our children and grandchildren. They are already waging a desperate a coup d-etat. We just need to recognize it for what it is.

Jacqueline Thomsen, “George Will on Trump-Cohen Audio Recording: ‘Trump is a ‘Low-Life From Queens’,” The Hill, July 25, 2018.  Referenced at:  http://thehill.com/homenews/administration/398744-george-will-on-trump-cohen-audio-recording-trump-is-a-low-life-from

I'm originally from New Jersey where I spent most of my life. I now live in North Carolina with my husband and 4 children. I'm an attorney
View all posts by forloveofgodandcountry →
This entry was posted in Uncategorized and tagged Diane Rufino, George Will, Last Word, Michael Cohen, MSNBC, Trump, Trump attorney, Trump derangement syndrome. Bookmark the permalink.

1 Response to Another Brain Rotted Out by Trump Derangement Syndrome