Cicero Warned About the Evils of an Ambitious Government

Posted on July 28, 2018 by forloveofgodandcountry 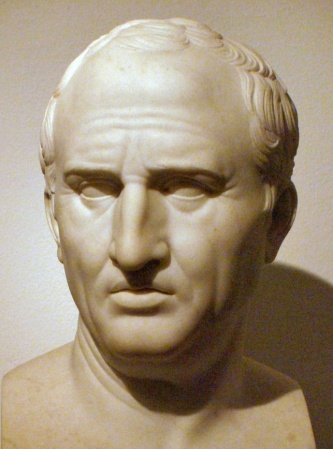 “When a government becomes powerful, it is a usurper which takes bread from innocent mouths and deprives honorable men of their substance for votes with which to perpetuate itself.” — Marcus Tullius Cicero.

Cicero was a famous lawyer, philosopher, and most importantly and significantly, a Roman senator during Pompey Magnus’ and then Julius Caesar’s rule. Anyone who has studied Roman history knows of the great Cicero. Cicero was the great defender, the great proponent of the Roman republic.

Keeping people comfortable in their poverty is what the government seeks… keeping them just comfortable enough so that they don’t bother exerting the energy to get a good education and become self-sufficient (which means they become suspicious and resentful of government); keeping them comfortable enough so that they don’t bother exerting the energy to go out and get a good job and therefore jeopardize getting all the free stuff. Man is essentially a lazy creature. If he can get for free what it normally would take a lot of energy to obtain, he has a tendency to get it for free… OR, to take it from those who have “enough.”  Man is also smart. If the incentives are taken away (the incentives that come from a free market economy) for him to be successful, he won’t be willing to put in the many years of education, all the hard work, the sacrifice, and take the necessary risks in order to become successful, to develop a necessary or a novel or a more efficient, effective product, to build a successful business, or to offer important services. If he can’t enjoy the benefits, the fruits, of his hard work and his sacrifice, he won’t put in the energy. And society suffers. Innovation stagnates.

Government needs – absolutely needs –being large enough to maintain the safety and security of the people and securing their inalienable rights yet small enough not to over-regulate the people it governs. As long as government remains small enough and dedicated to the proper aims for its existence, then it should not need to find ways to control people, control the votes they cast, and keep them dependent and thus prevent them from investing in themselves and doing for themselves. Being independent and able to provide for oneself is the absolute way to be objective about government and how it is being run and how it is governing, and therefore the best way to keep it honest and ethical.

Again, Cicero understood the evils that come from an ambitious government.

Cicero had a profound impact on our Founding Fathers, particularly on their understanding of the proper role of government and their design to secure human rights and defend individual liberty by tightly constraining government. As he wrote: “Never was a government that was not composed of liars, malefactors and thieves.”

During the Enlightenment era, philosophers from England and France began to think similarly to Cicero – about the natural role of government rather than a divine right to sovereignty. They, as Cicero did, spent a lot of time philosophizing about the proper role of government and of laws. Frederic Bastiat, for example, recognized that the greatest single threat to liberty is government. The extension of that is that government must be established for the right reasons and must be constrained.

In his writings, Cicero talked about the rightful purpose of laws. He said laws had to serve “right reason’; in other words, laws should promote and reward good behavior while punishing and discouraging bad behavior. In his book, The Law, Bastiat talks about laws needing to be kept in their proper domain which is the protection of every person’s liberty and property.  According to Bastiat: “See if the law takes from some persons what belongs to them, and gives it to other persons to whom it does not belong. See if the law benefits one citizen at the expense of another by doing what the citizen himself cannot do without committing a crime.”

Relying on Cicero’s advice, and Bastiat’s as well, to keep government minimal and constrained, adding in John Locke’s explanation for the natural purpose for government (to secure individual rights), and topping it off with Montesquieu’s advice for the need for checks and balance on government to keep power that is properly divided in check, our Founders came up with the government that was created by the US Constitution.

Our current federal government hardly resembles that government. It has gotten large, bloated, aggressive, and overly ambitious. It is so ambitious that it looks out for itself first and foremost. Consequently, it now longer knows what its “proper domain” is and in many respects, it is no longer interested in protecting every person’s liberty and property. It is certainly not interested at all in property rights. Property now exists for government to tax.

Cicero started man thinking in the right direction – a direction that would ultimately result in a nation defined by the Declaration of Independence and one dedicated to the security of individual liberty. Sadly, the government he believed and stood up for would cost him his life.

During the years when Julius Caesar wrestled control of Rome from Pompey and then sought to concentrate power in just himself, Cicero warned about the dangers to the republic. Concentrating power in himself, Caesar naturally sought to take power away from the Senate, the people’s body, thus taking away government power from the people. Cicero believed and defended the Roman republic. His strength of character and devotion to principle led to his demise. He was assassinated on the order of Marcus Antony and Augustus Caesar, per Rome’s Proscription law, labeled as a traitor for daring to remain loyal to the republic rather than to Rome’s all-powerful leaders, Julius Caesar, Augustus, and Antony. Antony instructed that Cicero be beheaded and that his hands be cut off, particularly the one he had used to compose the speeches against him, portraying him as a despot. Cicero’s head was put on display outside the Senate, by its door, and his hands nailed to the podium on the Senate floor, to deter future insolent behavior.

Let us never forget our courageous founders who put their lives on the line to stake out our country’s independence from a government that had grown tyrannical and disrespectful to individual rights. We get a glimpse of what was at stake for them when we read the final paragraph of the Declaration of Independence: “… we mutually pledge to each other our Lives, our Fortunes and our sacred Honor.” Their act of rebelling against the Crown was an act of treason, punishable by the most cruel and horrible of deaths. They, like Cicero, stood up for responsible government, a government (republic) of the people and responsible to the people, knowing they would likely be punished for being traitorous.

The question is, of course, will we heed Cicero’s advice. Will we appreciate Bastiat’s warning. Are we doomed to an ambitious government that will continue down the road to socialism and political despotism or will be work to take back our government and divest it of its unconstitutional and unnatural powers.

I'm originally from New Jersey where I spent most of my life. I now live in North Carolina with my husband and 4 children. I'm an attorney
View all posts by forloveofgodandcountry →
This entry was posted in Uncategorized and tagged ambitioius government, Bastiat, Cicero, Diane Rufino, Founding Fathers, government, limited government, republic, Roman republic, roman senator, Rome, rule of law, socialism, socialist goverment. Bookmark the permalink.