MONTICELLO: Missing the Opportunity to Educate Americans on the Extensive Legacy of Thomas Jefferson

Posted on July 1, 2019 by forloveofgodandcountry 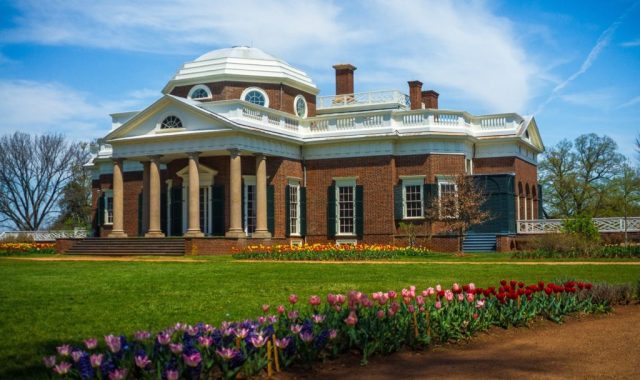 I was contacted this morning by Monticello, asking for a donation. While those who know me, and perhaps even those who have read my articles, know that Thomas Jefferson is my favorite Founding Father and has had the most impact on me as I’ve come to learn and appreciate the role of government, the government system we’ve adopted here in the states and then in the United States, our understanding of what our rights and liberties are (natural and civil) and most importantly, how to successfully protect and secure them, I have a big problem with how Monticello has chosen to honor its famous owner. The following is the response I sent to Monticello:

I would be happy to donate to anything to further the legacy of the great Thomas Jefferson, but unfortunately, today’s Monticello does very little in that regard. I visited Jefferson’s home 2 years ago and was horribly disappointed to see that about half of the tour and half of the presentations were NOT focused on Jefferson or on the extensive contributions he made to this country (and to France as well), but rather were focused on his slaves, on how they lived at Monticello, and on slavery in general. Visitors to Monticello would never know all the incredible contributions that Jefferson made during his life, other than his authorship of the Declaration of Independence. Thomas Jefferson gave us and the world the Declaration of Independence, the French Declaration of the Rights of Man & of the Citizen (a civil rights document from the French Revolution written as a collaboration between he and the Marquis de Lafayette), the Virginia Statute for Religious Freedom (addressing both the natural right to one’s conscience and religious affiliation and exercise), the Northwest Ordinance, his influence on the state constitution of Virginia and its Declaration of Rights, his strong influence on James Madison to add a US Bill of Rights, his powerful defense of the “Necessary & Proper” Clause of the Constitution (to strictly confine what powers the government was delegated – going head-to-head with the nationalist/monarchist Alexander Hamilton), his defense of State’s Rights and his brilliant articulation of the doctrine of Nullification, the hundreds of letters he wrote explaining the meaning and intent of the Constitution and providing warnings and advice for future generations, and his creation of the US Library of Congress. While slavery was an (evil) institution practiced in our country, and in fact, was an institution that was firmly entrenched and embraced by almost all countries and colonies of the world at the time, it was NOT a contribution of Jefferson.

It is a sad state of affairs when one visits the home of Thomas Jefferson and leaves knowing more about his slaves and how they served him than about all of the products of his great genius…… the products that recognized the rights of the individual, have articulated those rights, have served as the precursor to the rights protected in the Bill of Rights, have emphasized the founding principles that define our US Constitution and our system of government, and have warned us of our eternal civil duty to this country.

Every year, an entire month is devoted to the study of slavery and the entire plight of African-Americans. There is no such month – in fact, not even a single day – devoted to the world-changing contributions of Thomas Jefferson. We hear about slavery almost every single day on the news and now from the halls of Congress, and our children are steeped in such lessons and themes in college. We no longer reference Thomas Jefferson, we don’t talk about him, our legislators don’t reference him, our schools don’t teach his lessons or teach of his contributions, and colleges/universities absolutely never give him his due (except to emphasize that he was a slave-owner). We all enjoy essential liberty rights today because of the founding documents written by him and every single American should know this and be able to link him to these rights.

Monticello, his home, his sanctum sanctorum, should AT LEAST, be the one place where tourists and visitors can be immersed in his great and extensive legacy (untainted and undiluted by a focus on slavery).

And so, I will NOT donate to Monticello. I refuse to donate a single dollar to an organization that so dishonorably dilutes the memory of our greatest Founding Father.

I hope you will reconsider how Monticello chooses to operate and how it chooses to use its unique status as a historical site, the home of our greatest Founding Father and the place of his greatest inspiration, as a teaching opportunity.

I'm originally from New Jersey where I spent most of my life. I now live in North Carolina with my husband and 4 children. I'm an attorney
View all posts by forloveofgodandcountry →
This entry was posted in Uncategorized and tagged Diane Rufino, letter to Monticello, Monticello, Thomas Jefferson. Bookmark the permalink.