Posted on January 10, 2019 by forloveofgodandcountry 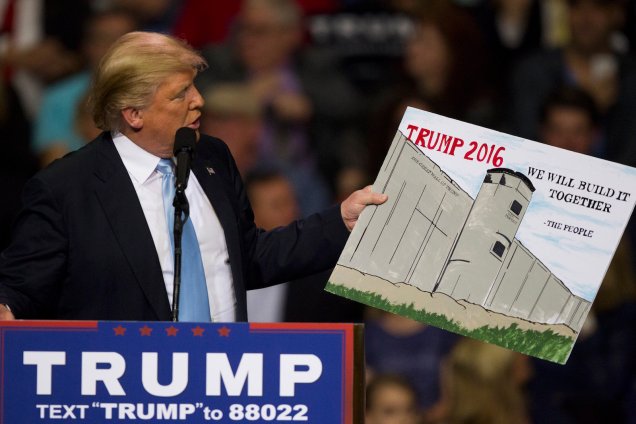 Donald Trump holds a sign from a supporter during a rally Wednesday, March 9, 2016 at the Crown Coliseum in Fayetteville, N.C.

I’m writing this to all Immigration Activists and Concerned Citizens…..

The time for action is NOW !!

Last night President Trump delivered a straightforward message to the American people regarding the situation on the southern border. He called that situation a “crisis.”

Anybody with eyes and ears, anybody who reads the real news, anybody who talks to their legislators, anyone who has a pulse on what’s going on in their community, in their state, and in this country is aware of the negative impact of open borders and unchecked immigration across our southern border. Have we already forgotten the caravan crisis?  Do we not understand that there are reasons why so many aliens are pouring into our country, choosing to take the illegal route – because we are NOT enforcing our laws, not trying to flesh them out once they get here, providing sanctuary cities and communities for them, providing them free education and healthcare, allowing them to go on our welfare system and to receive benefits and social programs (that US citizens must pay for)?

Several years ago, a student that had just graduated from a school I was teaching died of a fentanyl overdose. Someone slipped it to him unsuspectedly at a concert. A year or so later, a young man at my church overdosed from a heroin/fentanyl overdose. No one would have ever suspected him of doing drugs. The young man who treats my lawn recently passed away from an overdose. And my longtime friend and neighbor lost his son to a fentanyl overdose. A few years ago, I spoke with some town officials and they told me that MS-13 gangs have moved into Greenville from the Kinston area (Kiinston, which is Lenoir County, is next to Duplin County, which houses the highest concentration of illegal Hispanics in NC). MS-13 started pushing drugs on ECU’s campus and violence followed. There was a drive-by shooting downtown which killed at least one or two innocent young people, and about two years ago, there was a shooting at an ECU student apartment complex (at a party) involving drugs.

Our state officials talk about the opioid crisis and the enormous toll it is taking on our young and they suggest that we need to provide healthcare for them so they can kick the addiction. Not once has anyone addressed the root cause of the problem – the border “crisis” — yes, a “crisis.” Without the drugs pouring into the country (90% of hard-core drugs such as heroin and fentanyl), we wouldn’t have this epidemic of overdoses, and without the addictions and drug use, we wouldn’t have to consider the increased costs in healthcare to cover this problem.

The same can be said for the burden on education, our healthcare system (how many times have you gone to the emergency room only to see it filled with Hispanics – of which at least 45% are here, in NC, illegally). How many unskilled Americans can’t provide for their families because an illegal has taken a job they could have been hired for?

Again, it’s not hard to understand how the situation at the border has finally escalated to a crisis.

They call the wall “immoral” yet live in walled and gated communities themselves. They care little about the threats and burdens to our communities because they don’t live in those communities. They don’t worry about violence because they enjoy the protection of armed security. The don’t care that our laws are broken because as career politicians, they have made sure that they are exempt from the laws they pass (or refuse to pass, or refuse to provide the tools for enforcement).

They mock the President for his campaign promise to have Mexico pay for the wall. Other Democrats and liberals mock him as well for that. But Mexican assets can easily be converted to pay for the border wall, as Trump has alluded to. Trade deals can be negotiated that result in funding for the wall. There are drug forfeiture laws that would allow the government to use money and property confiscated because they were illegally obtained by drug trafficking for the wall. And then there is the simple math – If illegals cost the American people $150 billion each year (EVERY YEAR), and wall funding is only $5 billion, then doesn’t it just make sense to invest a one-time $5 billion allocation for the wall to save $150 billion every year?

Others reject the notion of an actual wall (a physical impenetrable barrier) saying that Trump will never get the $5 billion he is asking for. Well, that’s just a ridiculous, typical-Democratic /liberal response. They have a hard time understanding the concept of “constitutional spending” anyway. A border wall is related to immigration and national security, both of which are expressly delegated tasks to the federal government in the US Constitution. So, funding for the wall would actually be characterized as “constitutional spending,” something our government rarely takes into consideration. Right now, Congress spends far too much on unconstitutional objects – such as funding to South American countries, Afghanistan, Pakistan, other Middle Eastern countries (all of which give us nothing of real value in return), funding for abortion overseas, funding for research on stupid things that have absolutely no relevance or usefulness, funding for education (yep, it’s unconstitutional), funding in the form of state grants, most times simply for the purpose of bribing the states into complying with government guidelines and policies that it technically can’t impose on them (thus enabling the government to do an end-run around the Constitution). Take away the unconstitutional spending and the government has plenty to spend on constitutional obligations such as a border wall to enhance our safety and security and to help enforce our duly-enacted immigration laws.

Schumer and Pelosi fault President Trump alone for the government shutdown, telling the American people that government officials aren’t getting paid because of him, his insistence on dwelling on a “manufactured crisis.,” and his refusal to work with the Democratic leadership in Congress.

As Senator Lindsey Graham commented, the federal employees affected by the government shutdown will get all their back pay. They’ll be OK. But Officer Ronil Singh’s wife will never see her husband again and their baby daughter will never know her father. Angel Moms will never see or hug their children again.

The question is whether all those deaths and tortures of Americans at the hand of illegal aliens, all the drugs (including heroin and fentanyl) pouring onto our country and killing our college-age children, the rise in MS-13 activity which terrorizes our communities, the rise in violent crime, and the very admissions of our border agents amounts to a “manufactured” crisis or an actual crisis.

Remember the faces and the stories of those Americans taken from us because of our border situation – Officer Ronil Singh (shot because the illegal didn’t want a traffic ticket), Pierce Corcoran (killed by a drunk driver, an illegal alien), Kate Steinle (shot while walking on a pier in San Francisco with her parents), Molly Tibbetts (abducted and killed by an alien while she was jogging), Josh Wilkerson (a high school student beaten, tortured, and set on fire by an illegal alien), Jamiel Shaw (high school student killed by an illegal released earlier that same day on his 3rd gun charge), Ronald da Silva (murdered by an illegal who had previously been deported), Kayla Cuevas and Nisa Mickens (best friends who were killed in 2016 by illegal MS-13 gang members), Sandra Duran (killed in a car crash in 2017 at the hands of an illegal alien who had been deported five times), Indianapolis Colts’ linebacker Edwin Jackson (killed by an illegal driving drunk), Rebecca Ann Johnson (murdered by an illegal), and so many others.

Please read the following and TAKE ACTION NOW – to support President Trump’s request for funding tall steel fence barriers at our southern border and apply pressure to members of Congress.

Here is the contact info. I suggest you call now instead of email, but email if you prefer.

CALL your Member of Congress and our two US Senators today (For those in the Third Congressional District, who knows if a call to Rep. Walter Jones will accomplish anything). This is what you’ll want to tell them:

Contact your member of the U.S House. If you don’t know, go to: http://www.house.gov [look at the upper right corner of the webpage and enter your Zip Code and then click “GO”].

Derek Thompson, “How Immigration Became So Controversial,” The Atlantic, February 2, 2018.  Referenced at:  https://www.theatlantic.com/politics/archive/2018/02/why-immigration-divides/552125/