A Tyrant in the House: Obama’s Systemic Weaponization of the Government Against Conservatives

Posted on September 2, 2018 by forloveofgodandcountry

I borrowed the meme below from the #WalkAway guys. They are pretty awesome.  Plus, they have the best memes!! 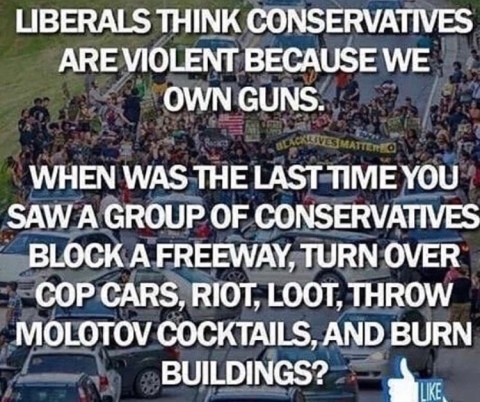 Anyway, I wanted to use this to make a point, in addition to the very powerful message this meme sends. It is true, the only threats of violence and acts of violence committed in the last 10 years, at least, has been by liberals and by progressive activists, by left-wing nut jobs, and by radical Islamists (embraced by Democrats). The only exception is Dylan Roof. , a self-professed white supremacist who many equate with the conservative side. (Note, it was not his original intent to shoot up a predominantly black church. He initially wanted to go on a shooting rampage at a local community college but when he scoped it out, he noticed there were too many armed security guards. Gun-free zones attract evil-intending shooters, no doubt about it).  Yet despite the propensity of liberals and liberal/progressive activists and those identifying with the Democratic Party and those with minds poisoned by hatred against conservatives to obtain guns for the purpose of harming innocent people, President Obama made the calculated and politically-motivated decision to have the Department of Homeland Security shift its focus away from radical Islamists and other extreme Muslim groups as potential threats of violence in the country to CONSERVATIVE groups and individuals, such as veterans, Christians (“those who still cling to their Guns and their Religion”), Second Amendment groups, Tea Party organizations, etc. According to Obama (and then DHS), such people and such groups are the most likely to radicalize and become violent.

Check it out for yourself:  COUNTERING RIGHTWING EXTREMISM — https://fas.org/irp/eprint/rightwing.pdf.

I guess Obama was asleep during the whole Black Lives Matter protest. Who can forget that infamous march in Dec. 2014, led by race hustler Al Sharpton (I will never honor him with the title “reverend”), where black protesters chanted: “What Do We Want?  — Dead Cops!”  “When Do We Want Them?  — NOW!”  After that, all the shootings and needless violence and killing of innocent cops ensued.  Where was Obama on that and then all the killing?  Where was the Department of Homeland Security on the Black Lives Matter protesters?  Which group of people was most likely to radicalize and become violent?

There was no honesty in what Obama did to conservatives. He targeted them needlessly for political purposes only. There was – and is – no honest comparison between conservatives and the Black Lives Matter movement when it comes to likelihood to become organized and violent.

Conservatives treasure their right to have and bear firearms for self-protection only (primarily). Other groups – liberal groups, progressive groups, BLM groups, Antifa – want guns to hurt people, to intimidate, to usher in a sense of fear, to silence speech and conduct.

Again, from what group are American’s freedoms and privileges under assault from?

That document, “Countering Rightwing Extremism” was implemented in April, just 2 months after Obama was inaugurated. DHS forced that policy on all state and local law enforcement agencies. Soon after, Obama’s IRS began harassing and targeting Tea Party groups and refusing to allow them to organize. If they couldn’t organize, they couldn’t collect money to engage in the election process and seek to advance their issues and their candidates.

So I ask you this: Was the IRS targeting all just an innocent mistake, without any political intent, as Obama told the American people?  Or was it just another policy to target, harass, silence, and vilify conservatives?

Having the benefit of hindsight, we now see the bigger picture:  First, Obama targeted conservatives for his own political purposes – to minimize the effect of Tea Party groups and other conservatives in the election of 2012, when he himself was running for a second term. You will remember that while he did win easily, in many states, his margin of victory was extraordinarily slim  And then there was the 2016 election…  With everything we know now – all the Deep State type efforts to take down Trump and to ensure that Hillary Clinton won the election (to continue the Obama-era policies) – we can conclude that one of Obama’s most important and consistent efforts was to target conservatives, minimize their political voice, create division to make it seem like conservatives were the bad guys, the racists, weaponize the government against them, and all for the purpose of ensuring that the government remain committed to his agenda (his progressive and global agenda) and remain in the hands of the Democratic Party.

Obama will go down in history as our most corrupt US president. He will be credited with the greatest level of citizen distrust in government – in its intelligence-gathering agencies, in its ability to administer justice fairly and evenly, in its ability to conduct itself within its legal/constitutional and ethical guidelines, and in its ability not to become a weapon against the American people.