The War of 1861: Education is the Best Way to Counter the Insanity of the Progressive Movement’s Goal of Tearing Down Confederate Monuments

Posted on August 30, 2018 by forloveofgodandcountry 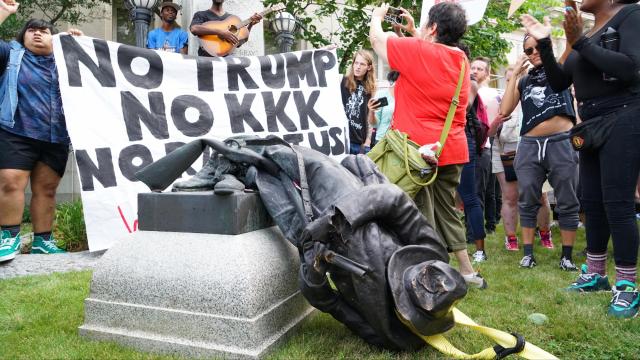 (This picture is of a toppled confederate statue at the old courthouse in Durham. Notice the reasons for the protest)

Let’s be honest. The toppling of the Confederate monuments, the demonization of the Confederate battle flag, the vilification of the names and memories of our treasured white Founding Fathers (and especially anyone of them who happened to own a slave), and the erasing of our history because it happens to be offensive is a POLITICAL movement. It is a contrived political initiative to counter the conservative movement that has been embraced with the election of Donald Trump and which clearly resonated in everyday America.

The movement evidences a serious lack of respect for the plight our country has taken, including the Civil War which ultimately resulted in the abolition of our greatest sin (slavery). Had the South not seceded, the timeline for abolition would have been quite different, as well as a fundamental lack of understanding of what the First Amendment is all about and the overall good and honest progress that honest and respectful civil discourse allows.  What I’m trying to say is that the progressive movement’s goal to tear down confederate monuments is a political movement that once again employs America’s un-educated and makes them into useful idiots for their cause. The cause is to foment dissent and division, that hallmarks of the progressive movement (thanks to Saul Alinsky and his “Rules for Radicals”).

When it comes to the Confederacy, the Civil War, and Abraham Lincoln, the general public is in desperate need of education. And I’ve put the following comments and resources together for the purpose to help further education and counter the progressive left with knowledge, understanding, facts, and sound arguments. Remember, there are always two sides to every issue. The side that wins the day is the one that has the facts on its side.

I have been asked by many people where I get my information from about the history of Lincoln’s War (aka, the War to Prevent Southern Independence, aka, the War of Northern Aggression) and the history of North Carolina concerning her secession from the Union.

First of all, I’m the daughter of a Civil War buff. My father studied the war, the generals, the battles, the battle strategies, the cemeteries, the destruction of the South, and the history of the country at the time. I’ve heard him talk about all this stuff all my life. Even though I was taught in school, as most of us were, that Lincoln was the greatest president ever, that he fought the Civil War (which the South started) to abolish slavery and to save the Union, my father always knew differently. It’s because he was always reading, always asking questions of the locals whenever he visited a battle site. He always talked to me about the war and about the generals, and about the savagery of the battles. I remember him constantly saying: “It’s a shame the South lost the war.”  OR, “The South should have won the war.”

My parents divorced when I was 10 years old. and one summer shortly thereafter, he wanted to spend some quality time with my sister and I so my Mom let him take us on a long summer trip out west, to Oklahoma, to visit his best friend. My father turned that trip into a complete tour of all the Civil War battle sites. My sister and I were young. I’m sure my sister was too young to appreciate learning about the war, but I remember a lot from that trip.

I’ve been reading about the war for many years now, certainly a lot more now that I’m living in North Carolina and have more time on my hands; it fascinates me. I had rejected the “Lincoln is Great” history lesson a long time ago, while I was still living in New Jersey.

I wanted to share some books that have recently come out for people to read, if they are interested in learning about the causes of the war (1861-1865) that tore our country apart, about the war itself, and about its lasting consequences. I call it Lincoln’s War, because that’s the rightful name.  I think if everyone does that reading and the research, they will agree with me on this.

Before I list the books and resources, I want to straighten a few misnomers out. The war can neither be termed a “Civil War” or “the War Between the States”:

—  A “Civil War” refers to a war between two groups in the same country who are fighting for control of the same government. The Southern states had seceded and had successfully established themselves legally as a separate and independent country. (1)  So, they were two groups from two separate countries, and mot two groups from the same country;  (2) The south seceded from the federal government; they clearly stated that they wanted to break political bonds with it and wanted NOTHING whatsoever to do with it anymore. And so, the two groups were not fighting for control of the same government. (3) The war only came when Abraham Lincoln tricked South Carolina into firing shots at Fort Sumter to start the war he needed to force the southern states back into the Union. With those shots at Fort Sumter, Lincoln claimed the South was “in rebellion against the United States” and called up troops to invade the south. It was a war for subjugation  of the South and not a war over which party would take control of the federal government.

With that, here is a list of some resources and a list of some of the books that have come out in the last 2-3 years or so that give an accurate and historical account of the causes of the conflict:

1.  The Abbeville Institute –  http://www.abbevilleinstitute.org  Check out their articles and their seminar programs. I follow them and attend their seminars when I can. I’m attending one in November in Texas on Nullification & Interposition). The organization is comprised of some of the top historians of the South; their credentials and research are impeccable. They formed the Institute several years ago when protesters started desecrating and destroying confederate monuments, demonizing the Confederate battle flag, and demanding that the names and statues of any Confederate general or leader, any southern leader tied to the confederate cause (like John Calhoun who helped initiate the Nullification Crisis and who defended slavery or Jefferson Davis, president of the CSA), or any person of historical significance who happened to own a slave be taken off college campus buildings and off campus, and then off street signs and public buildings. Those historians, like Donald Livingston and Clyde Wilson and Brion McClanahan new that Americans were sorely mis-educated or un-educated about our American (southern) history.

2.  My Blogsite –  http://www.forloveofgodandcountry.com    (I have written many articles over the years on this topic of the war, on Lincoln, on the right of secession, etc)

3.  BOOK:  The Un-Civil War: Shattering the Historical Myths, by Leonard “Mike” Scruggs.   (Mr. Scruggs lives in North Carolina. He is a Vietnam vet who writes and speaks about both the Civil War and the Vietnam War)

4.  BOOK:  Slavery Was Not the Cause of the War Between the States, by Gene Kizer, Jr.   (I couldn’t put this book down; I read it in one day)

5.  BOOK:  Union At All Costs: From Confederation to Consolidation, by John M. Taylor

6.  BOOK:  Is Davis a Traitor? Or Was Secession a Constitutional Right Previous to the War of 1861?   By Albert Taylor Bledsoe (written around 1865, so it’s most contemporaneous. His goal was to make sure the world understood the South’s reasons for secession and wanting to separate from the federal government before the victors of the war, the North, had its opportunity to commandeer the official story)

7.  BOOK:  The Real Lincoln, A New Look at Abraham Lincoln, His Agenda and Unnecessary War, by Thomas DiLorenzo

8.  BOOK:  Lincoln Unmasked: What You’re Not Supposed to Know About Dishonest Abe, by Thomas DiLorenzo 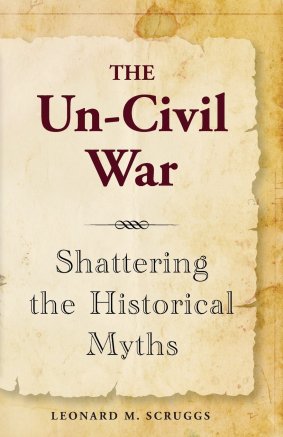 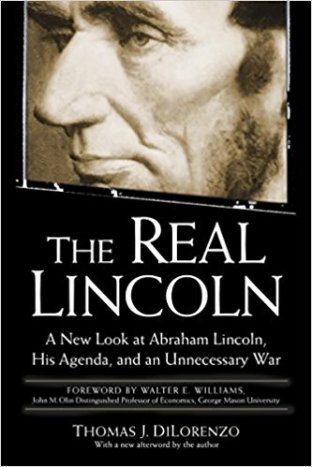 8 Responses to The War of 1861: Education is the Best Way to Counter the Insanity of the Progressive Movement’s Goal of Tearing Down Confederate Monuments