Posted on June 26, 2018 by forloveofgodandcountry 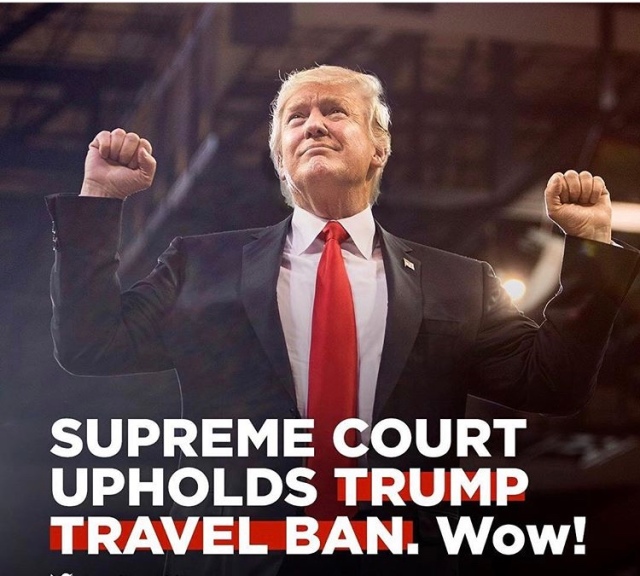 Today, the Supreme Court handed down its “opinion” in the case challenging Trump’s Travel Ban (Trump v. Hawaii), and it rejected the decision of the uber liberal 9th Circuit Court of Appeals which struck the ban down as exceeding the president’s power under the Immigration & Nationality Act and as violating the Establishment Clause by selectively denying entry into the US to Muslims.

BACKGROUND:  In September 2017, President Trump issued Proclamation No. 9645 (the “Travel Ban,” aka, the “Muslim Travel Ban”), seeking to improve vetting procedures for foreign nationals traveling to the United States by identifying ongoing deficiencies in the information needed to assess whether nationals of particular countries present a security threat. The 12-page Proclamation is more detailed than any prior order issued under the Immigration & Nationality Act [codified at 8 US Code §1182(f)]. The Proclamation placed entry restrictions on the nationals of eight countries whose systems for managing and sharing information about their nationals the President deemed inadequate. Countries were selected for inclusion based on a review undertaken pursuant to one of the President’s earlier Executive Orders. As part of that review, the Department of Homeland Security (DHS), in consultation with the State Department and intelligence agencies, developed an information and risk assessment “baseline.”  DHS then collected and evaluated data for all foreign governments, identifying those having deficient information-sharing practices and presenting national security concerns, as well as other countries “at risk” of failing to meet the baseline.

After a 50-day period during which the State Department made diplomatic efforts to encourage foreign governments to improve their practices, the Acting Secretary of Homeland Security concluded that eight countries –Chad, Iran, Iraq, Libya, North Korea, Syria, Venezuela, and Yemen — remained deficient. She recommended entry restrictions for certain nationals from all of those countries but Iraq, which had a close cooperative relationship with the U. S. She also recommended including Somalia, which met the information-sharing component of the baseline standards but had other special risk factors, such as a significant terrorist presence. After consulting with multiple Cabinet members, the President adopted the recommendations and issued the Proclamation.

The Proclamation (the Travel Ban) was challenged as unconstitutional by the State of Hawaii, three individuals with foreign relatives affected by the entry suspension, and the Muslim Association of Hawaii. They alleged that the Ban  violates the Immigration and Nationality Act (INA) and the Establishment Clause. The District Court granted a nationwide preliminary injunction barring enforcement of the restrictions. That is, the court “enjoined” or prevented the administration from putting the Ban into effect. Trump appealed the decision, which went to the 9th Circuit, and as expected, the 9th Circuit affirmed. It argued that the Ban contravened or conflicted with two sections of the Immigration & Nationality Act, or INA (§1182(f) and §1152(a)(1)(A).

1182(f) authorizes the President to “suspend the entry of all aliens or any class of aliens” whenever he “finds” that their entry “would be detrimental to the interests of the United States,” and §1152(a)(1)(A) provides that “no person shall . . . be discriminated against in the issuance of an immigrant visa because of the person’s race, sex, nationality, place of birth, or place of residence.” [The 9th Circuit did not address the Establishment Clause claim].

The decision, written by Chief Justice John Roberts, can be summarized by the following portions of the opinion:

(1)  The President has lawfully exercised the broad discretion granted to him under §1182(f) to suspend the entry of aliens into the United States.

(a)  Common sense and historical practice confirm that §1152(a)(1)(A) does not limit the President’s delegated authority under §1182(f). Presidents have repeatedly exercised their authority to suspend entry on the basis of nationality. According to plaintiffs’ logic, the President would not be permitted to suspend entry from particular foreign states in response to an epidemic, or even if the United States were on the brink of war. The language of the statute is clear. By its terms, §1182(f) exudes deference to the President in every clause. It entrusts to the President the decisions whether and when to suspend entry, whose entry to suspend, for how long, and on what conditions. It thus vests the President with “ample power” – near “plenary power” – to impose entry restrictions in addition to those elsewhere enumerated in the INA.

(b)  The Proclamation falls well within this comprehensive delegation. The sole prerequisite set forth in §1182(f) is that the President “find that the entry of the covered aliens “would be detrimental to the interests of the United States.” The President has undoubtedly fulfilled that requirement here. He first ordered DHS and other agencies to conduct comprehensive evaluation of every single country’s compliance with the information and risk assessment baseline. He then issued a Proclamation with extensive findings about the deficiencies and their impact. Based on that review, he found that restricting entry of aliens who could not be vetted with adequate information was in the national interest.

(c)  The Proclamation comports with the remaining textual limits in §1182(f). While the word “suspend” often connotes a temporary deferral, the President is not required to prescribe in advance a fixed end date for the entry restriction. Like its predecessors, the Proclamation makes clear that its “conditional restrictions” will remain in force only so long as necessary to “address” the identified “inadequacies and risks” within the covered nations. Finally, the Proclamation properly identifies a “class of aliens” whose entry is suspended, and the word “class” comfortably encompasses a group of people linked by nationality.

(2)  Plaintiffs allege that the primary purpose of the Proclamation was religious animus and that the President’s stated concerns about vetting protocols and national security were but pretexts for discriminating against Muslims. At the heart of their case is a series of statements by the President and his advisers both during the campaign and since the President assumed office. The issue, however, is not whether to denounce the President’s statements, but the significance of those statements in reviewing a Presidential directive, neutral on its face, addressing a matter within the core of executive responsibility. In doing so, the Court must consider not only the statements of a particular President (once in office), but also the authority of the Presidency itself.

(3)  The admission and exclusion of foreign nationals is a “fundamental sovereign attribute exercised by the Government’s political departments largely immune from judicial control.” Although foreign nationals seeking admission have no constitutional right to entry, this Court has engaged in a circumscribed judicial inquiry when the denial of a visa allegedly burdens the constitutional rights of a US citizen. That review is limited to whether the Executive gives a “facially legitimate and bonafide” reason for its action, but the Court need not define the precise contours of that narrow inquiry in this case. For today’s purposes, the Court assumes that it may look behind the face of the Proclamation to the extent of applying rational basis review (least stringent form of review for constitutionality), which asks whether the entry policy is plausibly related to the Government’s stated objective to protect the country and improve vetting processes. Plaintiffs’ extrinsic evidence may be considered, but the policy will be upheld so long as it can reasonably be understood to result from a justification independent of unconstitutional grounds.

Plaintiffs challenge the entry suspension based on their perception of its effectiveness and wisdom, but the Court cannot substitute its own assessment for the Executive’s predictive judgments on such matters.

Accordingly, the government has set forth a sufficient national security justification to survive rational basis review and therefore the Proclamation (the Travel Ban) is upheld.

With today’s rejection and reversal of the 9th Circuit’s decision, the Trump administration has the green light to move forward with its ban. It can now go into effect.

I'm originally from New Jersey where I spent most of my life. I now live in North Carolina with my husband and 4 children. I'm an attorney
View all posts by forloveofgodandcountry →
This entry was posted in Uncategorized and tagged Diane Rufino, Muslim travel ban, Supreme Court, travel ban, Trump, Trump v. Hawaii, Trump's travel ban. Bookmark the permalink.