In the Lap of the Gods (ie, federal judges) – Trump’s New Asylum Policy

Posted on July 30, 2019 by forloveofgodandcountry 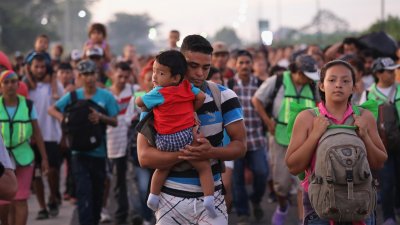 “The tyranny of a dysfunctional system that permits plaintiffs to forum shop in order to find a single district judge who will purport to dictate immigration policy to the entire Nation … must come to an end.” — Stephanie Grisham, White House press secretary

Last Tuesday, President Trump’s new asylum policy went into effect. As we all know, the Trump administration has been pursuing meaningful changes to our immigration policy to fight back against the crisis at our southern border – the gross lawlessness and disrespect for our laws, the human trafficking, the drug trafficking, and the influx of violent gangs to prey on our youth. Unfortunately, President Trump been working with a very hostile Democrat-controlled House of Representatives and a very hostile pop culture that views any policy that denies any person anywhere a right to residency in the United States, a right to taxpayer-funded programs, and a right to continue illegality and criminality in our cities and communities as racist and as violative of human rights. But aside from the wall, which is moving forward, the new asylum policy is a forceful attempt to meaningfully cut down on the number of people seeking asylum here in our country.

The new policy requires that any migrant who passes through another country on their way to the United States MUST seek asylum in that country and be denied in order to be considered for asylum in our country. If it is truly about escaping from an oppressive regime in their home country, then once they’ve entered another country, they’ve achieved their goal and they should be happy to take their chances with another country (especially one sharing the same language and very close to their own culture).

Most migrants arriving at our southern border applying for asylum (coming from Central America, Haiti, Cuba, and Africa) necessarily pass through Mexico. They likely also pass through other countries. Why not apply for asylum in Mexico? Isn’t it better than other countries like Haiti (a true shithole of a country), Cuba (poor and oppressive; communist), other poor Central American countries, and many countries in Africa? Mexico isn’t communist. It isn’t a repressive socialist country. And it happens to have the 15th largest economy in the world.

Under the former asylum policy, asylum seekers had to pass a “test” to be considered for asylum status in the US. It used to be an easy test: applicants needed to assert a “credible fear” of remaining in their country – of persecution, violence, genocide, etc. Under this simple test (where the applicant asserts his or her “credible fear” through an interview process), most applicants have been able to pass this hurdle. But under Trump’s new policy, there is a subsequent hurdle. Applicants will now need to show that they have sought asylum in at least one country that they traveled through to get to the US and were denied. Most will fail this second hurdle. Why? Because the real goal of the trip to the US is not about escaping the “credible threat” but about coming here and taking advantage of all the benefits our country offers (especially to those who have no professional skills and are at the poverty level or below). Applicants who fail this second hurdle will be placed on fast-track deportation status. They will be afforded a quick proceeding concerning their application for asylum followed by a flight back home to their country of origin – all at taxpayer expense.

Cuban migrants claim special status because they say that once they leave, they will not be allowed back. They also claim that the first country they arrive at on their way to the US is Nicaragua, a communist country. They certainly don’t want to seek asylum in another communist country. But they don’t explain, and they can’t logically explain, why they can’t seek asylum in Mexico.

Trump’s new asylum policy was immediately challenged by the ACLU (American Civil Liberties Union), the Southern Poverty Law Center (an anti-white hate group), and other civil liberties groups. These groups technically lack standing to sue – they themselves will not suffer great harm by the new policy. Yet, they filed motions seeking a temporary restraining order (TRO) , to block the implementation of the policy. But President Trump defends the policy by saying that immigrants, especially lately, are taking advantage of our nation’s asylum policy and taking advantage of services provided at US taxpayer expense. Trump also acknowledges that these latest groups of migrants (including migrant caravans), which just so happens to have formed since he took office, are being prompted and aided by asylum support groups here in the US (including legal assistance) and by the Democratic Party.

One commentator had this to say about Trump’s new policy: “Most migrants pass through both Guatemala and then Mexico to get to the United States. These migrants are claiming that they need to escape from their home country because of some ‘credible fear.’ Well, once they leave their oppressive home country, they’ve escaped from the oppression. So, is it really about escaping the fear and persecution of their home country or is it more about coming specifically to the US?”

On Wednesday, July 24, a federal judge in DC, District Court Judge Timothy Kelly denied the motion asking for the Temporary Restraining Order. He explained that the groups challenging the policy did not show that their work would suffer “irreparable harm” if the policy went into effect (which is the proper threshold question for such a request). Judge Kelly was appointed to the bench by President Trump.

However, as expected, a federal judge in San Francisco, Judge Jon Tigar, agreed with challengers and went ahead and issued a TRO, putting a hold on the new asylum policy. He issued his ruling also on Wednesday, just hours after Judge Kelly denied the motion in DC. The White House has condemned this ruling, referring to it as an example of “judge shopping.” As White House Press Secretary, Stephanie Grisham commented: “The tyranny of a dysfunctional system that permits plaintiffs to forum shop in order to find a single district judge who will purport to dictate immigration policy to the entire Nation … must come to an end.”

The case will eventually head to the Supreme Court.

The article below, posted on July 25 in the Epoch Times, addresses Judge Tigar’s ruling:

Just hours earlier, another federal judge in Washington denied a similar request from a different group of plaintiffs.

The administration has complained for some time about what it calls “activist judges,” whom it accuses of blocking its policies on ideological grounds. “Too many judges believe it is their right, their duty, to act upon their sympathies and policy preferences,” then-Attorney General Jeff Sessions said in an Oct. 15 speech, calling judicial activism “a threat to our representative government and the liberty it secures.”

Among the specific issues Sessions pointed out were the nationwide injunctions, in which a judge presiding over a local case blocks the executive action in dispute across the nation while the case proceeds through the courts. He explained: “In the first 175 years of this republic, not a single judge issued one of these orders. But they have been growing in frequency and, since President Trump took office less than two years ago, 27 district courts have issued such an order.” Attorney General William Barr voiced a similar concern on May 21, saying “the legal community and the broader public should be more concerned, particularly about this trend of nationwide injunctions.”

In 2018, Supreme Court Justice Clarence Thomas wrote in an opinion that nationwide injunctions “are beginning to take a toll on the federal court system….. I am skeptical that district courts have the authority to enter universal injunctions … If their popularity continues, this Court must address their legality.”

Earlier in May, Vice President Mike Pence said the administration will “seek opportunities” to have the Supreme Court review whether district judges have the legal power to issue such injunctions in the first place.

“It’s imperative that we restore the historic tradition that district judges do not set policy for the whole nation,” Pence said.

Judge Tigar ruled in favor of advocacy groups represented by the American Civil Liberties Union, the Southern Poverty Law Center, and the Center for Constitutional Rights.

The policy would have limited exceptions that would allow for asylum: if someone has been trafficked; if an asylum-seeker sought protection in a country but was denied; or if the country the migrant passed through didn’t sign one of the major international treaties that govern how refugees are managed, which most Western countries have signed.

The decision comes as tens of thousands of people wait in Mexico on official and unofficial lists formed after U.S. agents started turning away many asylum-seekers, citing a lack of space and delays in immigration courts. They also include people sent to wait in Mexico while their cases wind through the U.S. immigration process, another Trump policy that has so far survived a legal challenge.

Tigar’s ruling is the latest example of courts blocking Trump’s immigration policies. A court stopped the administration from detaining asylum-seekers without giving them a chance to be released on bond. A judge in Oakland, California, prevented the Trump administration from tapping $2.5 billion in Pentagon money to build border barriers. (The administration has appealed that decision to the U.S. Supreme Court and has asked for a ruling by July 26).