The Constitutional Convention of 1787: Prayer Served a Purpose Just as Prayer Always Serves a Purpose

Posted on October 10, 2018 by forloveofgodandcountry 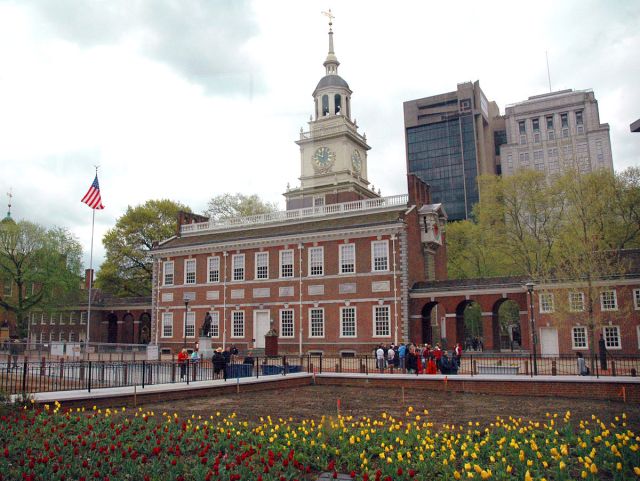 Here is a trivia question for you:  Who were the oldest and youngest delegates at the Constitutional Convention in Philadelphia, in 1787 ?

The oldest delegate, as many I’m sure remember from your history class, was Benjamin Franklin. He was the delegate from Pennsylvania and he attended the Convention at the ripe old age of 81. The youngest delegate was Jonathan Dayton, age 26, from state of New Jersey.

These two men share in a very special moment at the Convention:

On June 28, almost exactly a month after the Constitutional Convention in Philadelphia convened, the 81–year-old Benjamin Franklin rose to address his fellow members. He had become frustrated over the constant and fruitless bickering and the inability of the representatives to made any significant progress in amending the federal government. He noted how some members had already left in disgust.

He began by talking about the fact that they were a well-read group of men; they had enjoyed a classical education and some studied further. In preparing for their important task that summer –  of designing an appropriate government to unify the states – they brushed up on their ancient history. They reviewed ancient history and the models of government that were established back then. They analyzed why the Republics of the ancient civilizations and empires ultimately failed. They looked at the modern governments in Europe, but quickly concluded that none were suitable. The delegates at the convention couldn’t find any common ground.

And so he suggested that they appeal to God for help.

And then he delivered the first prayer of the Convention:

The small progress we have made after 4 or five weeks in close attendance and in continual reasonings with each other, with different sentiments on almost every question, is melancholy proof of the imperfection of the Human Understanding. We indeed seem to feel our own want of political wisdom, since we have been running about in search of it. We have gone back to ancient history for models of Government, and examined the different forms of those Republics which having been formed with the seeds of their own dissolution now no longer exist. And we have viewed Modern States all round Europe, but find none of their Constitutions suitable to our circumstances.

In this situation of this Assembly, groping as it were in the dark to find political truth, and scarce able to distinguish it when presented to us, how has it happened, Sir, that we have not hitherto once thought of humbly applying to the Father of lights to illuminate our understandings?  In the beginning of the Contest with Great Britain, when we were sensible of danger we had daily prayer in this room for the divine protection. Our prayers, Sir, were heard, and they were graciously answered. All of us who were engaged in the struggle must have observed frequent instances of a superintending providence in our favor.

To that kind providence we owe this happy opportunity of consulting in peace on the means of establishing our future national felicity.  And have we now forgotten that powerful friend?  Or do we imagine that we no longer need his assistance? I have lived, Sir, a long time, and the longer I live, the more convincing proofs I see of this truth: that God Governs in the affairs of men. And if a sparrow cannot fall to the ground without his notice, is it probable that an empire can rise without his aid?

We have been assured, Sir, in the Sacred Writings, in Psalm 117:1a, that “Except the Lord build the House, they labor in vain that build it.” I firmly believe this. And I also believe that without His concurring aid, we shall succeed in this political building no better than the Builders of Babel. We shall be divided by our little partial local interests; our projects will be confounded, and we ourselves shall become a reproach and bye word down to future ages. And what is worse, mankind may hereafter from this unfortunate instance, despair of establishing Governments by Human wisdom and leave it to chance, war and conquest.

I therefore beg leave to move that henceforth prayers imploring the assistance of Heaven, and its blessings on our deliberations, be held in this Assembly every morning before we proceed to business, and that one or more of the Clergy of this City be requested to officiate in that Service.

Out of the 55 delegates at the Convention, only a handful were devoutly religious. And here was Franklin, perhaps one of the least religious of the Founding Fathers, calling for prayer and quoting Scripture. As James Madison noted, in the notes he meticulously took of the Convention, many were deeply moved.

New Jersey delegate Jonathan Dayton reported:  “The Doctor sat down; and never did I behold a countenance at once so dignified and delighted as was that of Washington at the dose of the address; nor were the members of the convention generally less affected. The words of the venerable Franklin fell upon our ears with a weight and authority, even greater that we may suppose an oracle to have had in a Roman senate!”

Immediately after Franklin spoke, Roger Sherman of Connecticut seconded his motion for prayer.

But the motion ended up fizzling out among the other participants. There were some who opposed to the motion to appoint chaplains to begin each day with prayer because they had no funds to pay such chaplains. In fact, he recorded his disappointment at the bottom of his prayer speech, writing: “The Convention, except three or four Persons, thought Prayers unnecessary.”

What is important to note in this tiny bit of history is that Ben Franklin’s passionate plea served to break the stalemate, or impasse, that was crippling the convention. The delegates were dismissed for three days, and some, moved by Franklin’s words, attended the Old First Reformed Church, where Rev. William Rogers held a special time of prayer for the proceedings. Dayton reported that when the delegates met again on July 2, much of the animosity was gone:  He noted: “We assembled again; and … every unfriendly feeling had been expelled, and a spirit of conciliation had been cultivated.”

While some difficulties continued to arise before the conclusion of the Convention’s business in September, the delegates apparently never returned to the fruitless bickering that had existed prior to June 28th.  It would certainly be an exaggeration to suggest that the drafting in earnest of the US Constitution began as the result of a prayer delivered at the Convention in Philadelphia, but Franklin’s call for prayer clearly played a pivotal role in softening the hearts and opening the minds of the delegates and reminding them that if they intended to proceed with such a critical undertaking without God’s help, all their efforts would be in vain.

“Benjamin Franklin’s Request for Prayers at the Constitutional Convention”  – http://www.beliefnet.com/resourcelib/docs/21/benjamin_franklins_request_for_prayers_at_the_constitutional__1.html

“Franklin’s Appeal for Prayer at the Constitutional Convention,” Wallbuilders –  https://wallbuilders.com/franklins-appeal-prayer-constitutional-convention/

I'm originally from New Jersey where I spent most of my life. I now live in North Carolina with my husband and 4 children. I'm an attorney
View all posts by forloveofgodandcountry →
This entry was posted in Uncategorized and tagged 1787, Ben Franklin's prayer, Benjamin Franklin, Constitution, Constitutional Convention, convention of 1787, Diane Rufino, Jonathan Dayton, June 28 1787, Philadelphia convention, prayer. Bookmark the permalink.