Next to the Democratic Party, the Entertainment Industry is the Largest Hate Group in the US

Posted on June 26, 2018 by forloveofgodandcountry 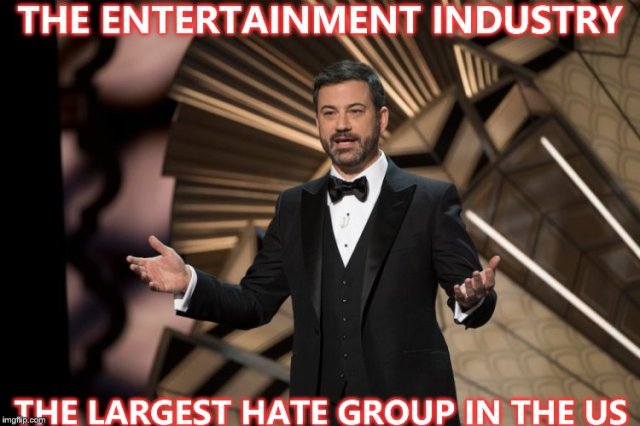 I made this meme this morning. With all the extreme haters in Hollywierd and in the Entertainment Industry – Robert DeNiro, Meryl Streep, Barbra Streisand. Jimmy Kimmel, Peter Fonda, Jim Carrey, Samantha B, Kathy Griffin, Ashley Judd, Tom Arnold, Jennifer Lawrence, Kevin Costner, J Lo, Alec Baldwin, the cast of SNL, Jay Z, Bruce Springsteen, Madonna, and more – I think it’s about time we call them out for what they are.

Under the Obama administration, Homeland Security was instructed to divert its attention away from true radicals such as Islamic jihadists and away from true hate groups such as the Muslim Brotherhood, Louis Farrakhan’s Nation of Islam, or white supremacy groups, and instead, focus its attention on conservatives.

On April 7, 2009, an unclassified assessment by Department of Homeland Security (DHS), titled “Rightwing Extremism: Current Economic and Political Climate Fueling Resurgence in Radicalization and Recruitment,” was adopted by the Obama administration — a mere 77 days after his inauguration. The document was leaked shortly after its release to law enforcement officials across the country and made public by Roger Hedgecock on April 13, 2009. It laid out the new president’s legislative and executive priorities on terrorism, guns and immigration. Uniquely combining these three issues would become a predictable, coordinated pattern during Obama’s two terms in office. It would define the Tom Ridge and Janet Napolitano eras at the DHS. As Eli Lake, a journalist and the former senior national security correspondent for The Daily Beast and Newsweek, wrote the day after the document was leaked, “Since its inception in 2003, the department has focused primarily on radicalization of Muslims and the prospect of homegrown Islamist terrorism.” Under Obama’s leadership, attention was directed away from Muslims and Islamist terrorism and redirected towards limiting the Second Amendment, scrutinizing military veterans and expanding both legal and illegal immigration.

For political reasons, decent and honest Americans, whose only “flaws” were to believe in the ideals of our country and to be smart enough to understand the breadth and meaning of our Constitution and Bill of Rights, were targeted by the government and put under its microscope and its harassment and enforcement power. As we know full well now, this is just one example of how Obama used the full power of the US government to silence political opponents.

If Homeland Security had been programmed to look at conservatives as hate groups and potential terrorists, how much more convincing is it to make the argument that Democrats, BLM groups, progressives/liberals, and anti-fascist groups are the real potential terrorists and the real threats to our ordered society here in the United States. Obviously, as we are seeing their hatred play out – on the stage, in their businesses, in videos, in tweets, on the streets, in front of private homes, at Congressional baseball games, etc – safety requires it.

Anyway, I’ve had it with actors, actresses, other members of the entertainment industry, including musicians and singers (except country music). I’m tired of their hatred, their foul language, their holier-than-thou attitudes, their loathing of this country, their attacks on our president and his family (no conservative group did that to the criminal, Obama), and their commitment to everything good and decent that the average person values. I’m boycotting them. I’m boycotting their movies, boycotting their shows, and boycotting their concerts (except those who support America). I’ll boycott them even though everyone knows how much my life revolves around movie releases and concerts. And everyone knows and how much I love to promote them all and write and publish reviews for those I enjoy. It will make me sad to look for other ways to be entertained, but I’ll gladly to do to exercise my First Amendment right of free expression.

Please Join Me. Send the haters the only message that matters to them — send them to irrelevancy. Affect their box office successes.

1 Response to Next to the Democratic Party, the Entertainment Industry is the Largest Hate Group in the US