Posted on February 22, 2018 by forloveofgodandcountry 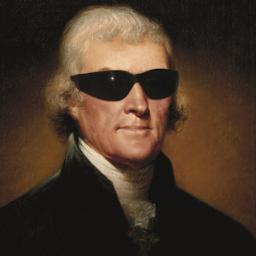 Thomas Jefferson is probably one of our greatest Founding Fathers, if not the greatest of them all. I think I’m going to be triggered if one other person demonizes him and demeans his legacy because of the fact that he owned slaves. Slavery was not only legal at that time, even constitutionally-protected, but it was a way of life all over the globe.

Jefferson’s presidency lasted from 1801-1808; he was only our young nation’s third president. His two terms were marked by discord with Great Britain, threats of secession by the New England states, an overly-ambitious Supreme Court, and he passed away on July 4, 1826. During that time, slavery was used by the great world powers in their island colonies. In 1815, we see that a gradual abolition of the slave trade began, mostly thru treaty agreement. In 1834, Great Britain, the Slavery Abolition Act went into effect, abolishing slavery throughout its kingdom (the British Empire) – not outright, but on a gradual basis over the following six years. Jefferson had been dead many years before the countries of the world took action to end the abdominal institution.

The sins of the entire world shouldn’t become Jefferson’s original.

Jefferson gave us something extraordinary. He wrote the Declaration of Independence, outlining a system of government for our newly-independent states that expressly rejected the British model. Under the British model, Kings have the absolute right to govern their subjects because of a divine right.  In the American States, and then the united States, according to Jefferson, the People have an absolute right to govern themselves because of a natural right.

And yes, when he wrote “All Men are created equal” he meant it to be without regard to race. Jefferson had hoped the new Union created by the Constitution would not recognize slavery as a legal institution.

Yet his contributions went far beyond the Declaration. He convinced James Madison that a Bill of Rights was absolutely necessary and that every freedom-loving individual is entitled to a Bill of Rights to set limits on the exercise of government. He fought long and hard for Freedom of Religion, for States’ Rights, and for a limited federal government.

People who don’t understand the significance of the words of the Declaration and who don’t see that Jefferson gave us something profoundly transformational, should simply thank him and say nothing else. The only reason we still have our freedoms and liberties is because every once and awhile our country has a moment of clarity and tries to get back to the principles Jefferson devoted his life to.

Jefferson has earned our unquestioned and undying gratitude. Monuments to him remind us of that great gems he gave us. Only the ignorant and the dissenters among us see only a slaveholder. We visit Monticello to learn more about him and his life and what inspired his lifelong commitment to service and to the direction of the great American experiment; we go there to see his vast book collection and the great volumes of his correspondence. We don’t go there to learn where his housekeepers slept or how meals were prepared or laundry done for him by his slaves.

I am not trying to demean anyone or demean anyone’s position, and I’m certainly not trying to insinuate that Jefferson was a God or a flawless individual. My point is that great men should be celebrated for their meaningful contributions. Our lives today are better for them and the lives of millions around the world are uplifted because of them. We don’t demonize Abraham Lincoln and demean the role he played in re-uniting the Union, even though we know the reason he pledged to stop the spread of slavery into the West was because he wanted those states to be a land for whites only. We don’t demonize President LBJ and demean his contribution to African-Americans when he signed the Civil Rights Act and Voting Rights Act into law, even though we know he was the most vile of racists and routinely referred to African-Americans using the “N” word.  We don’t demonize Mohammed Ali and demean his title as history’s greatest boxer, even though for the first half of his life he was an unabashed bigot and racial separatist. We don’t demonize Dr. Martin Luther King Jr because he cheated on his wife yet claiming the title of ‘reverend.’ We don’t demonize George Washington or demean his role as the Father of our County even though he owned slaves. And we don’t demonize Albert Einstein and reject his theory of relativity because he married his cousin.

Almost every human being is flawed in one way or another. And every important Founding Father can certainly be accused of owning slaves; My goodness… Presidents of the United States owned slaves up until the year 1849.

The insanity needs to stop. What we need to do is take MORE time to learn about this great men and their lives and contributions and NOT vilify them so that we end up spending less time studying them.

I'm originally from New Jersey where I spent most of my life. I now live in North Carolina with my husband and 4 children. I'm an attorney
View all posts by forloveofgodandcountry →
This entry was posted in Uncategorized and tagged Declaration of Independence, Diane Rufino, slaveowner, slavery, Thomas Jefferson. Bookmark the permalink.