Posted on January 28, 2018 by forloveofgodandcountry 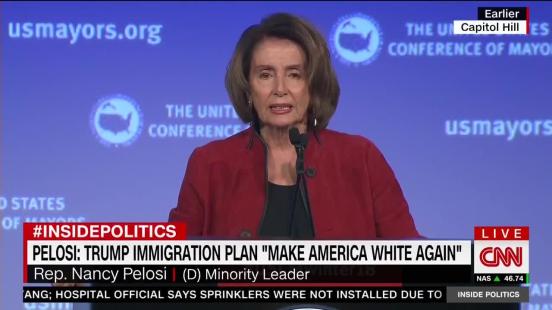 House Minority Leader Nancy Pelosi (D-CA) slammed President Trump’s framework for immigration reform that was submitted to lawmakers on Capitol Hill last Thursday, as he promised to do. The deranged, self-admitted “progressive left Democrat” vomited her opinion of the framework in a public statement: “Last night, the President put forth a plan…. That plan is a campaign to make America white again.”

She continued to spew the rantings of a demented diseased mind: “The Administration’s anti-immigrant framework is an act of staggering cowardice which attempts to hold the DREAMers hostage to a hateful anti-immigrant scheme. The 50 percent cut to legal immigration in the framework and the recent announcements to end Temporary Protected Status for Central Americans and Haitians are both part of the same cruel agenda. The DREAMers will not be ransomed for a hateful agenda that betrays our sacred American values.”

As with the rest of “progressive left Democrats,” Pelosi has no clue whatsoever what “our country’s sacred American values are.”

Most of us in the Tea Party movement and in other conservative movements – as well as on shows like Tucker Carlson and Mark Levin – have spoken about how offensive the Democrat Party has become and how anti-America it has become over the years. In order to advance the Democrat Party, its leaders and members must trash America. There are enough single-issue voters, far too many ignorant and dependent-on-government individuals, and a growing number of social and psychological/biological misfits out there… conservative values stand in their way of living a life without producing anything or contributing anything, of getting other people’s money, or living their perverse lifestyles. They hate religion, they hate the notion of studying honest history (god forbid they learn something and it makes sense!), they hate the notion of education in general and being prepared to take a meaningful place in the workforce, they hate the notion of personal responsibility, they hate the notion of a stable traditional nuclear family, and they hate the fact that people cling to time-honored truths and values such as biology and the greatest obligation of a human being – to have and properly raise their next generation. Progressive Democrats must trash religion, the Constitution, our founding fathers, our founding principles, historic figures, and our history itself (except, of course, slavery. That topic must be emphasized again and again and again and again. Every time period in history must be de-emphasized EXCEPT for slavery and Jim Crow). They need poverty; they need people who live below the poverty line, and they need people who are content to live in poverty. People like that will never question anything as long as entitlement checks and programs support them.

Pelosi and Schumer, and in fact, almost the entire Democrat Party, take the side of illegals over the interests and concerns of American citizens. These party leaders live as royalty in this country and have no idea how illegal immigration is affecting our day-to-day lives, our communities, and even our ability to live an existence that isn’t consumed by politics and political correctness. Sanctuary cities… really??? Who really thinks this is a good idea? A jury that couldn’t provide justice for Kate Seinle…. Is it any wonder why it hardly feels like America anymore?? Day after day we learn about the deaths of innocent children – legal Americans – at the hand of illegals, including DREAMers, and the families that will forever grieve, and as well as other violent crime, including an increase in the drug traffic. They don’t talk about this aspect of illegal immigration. The liberal media doesn’t focus on any of this. They want Americans to believe that DREAMers and illegal immigrants are good and decent and loving and productive individuals, and a benefit to our country. They criticize those who point out the deaths and the violence and the increase in drugs and claim that a few bad examples must not condemn the entire population of DREAMers or illegals. Yet they had no problem condemning all those who voted for Donald Trump as “deplorables” and “racists.” They have no problem labeling all conservatives as “racist,” “islamophobic,” “homophobic,” “xenophobic,” and now, as “white supremacists.”

They give you the impression that DREAMers are just like other Americans and are on their way to contributing to our country. But they neglect to mention some very telling statistics about DREAMers. DREAMers have a 21% high-school drop-out rate. The national average is 5.1%. They end up pregnant, jobless, on government assistance, and/or, involved in crime or drugs. In Arizona, DREAMrs commit crime at two times the rate of ordinary legal citizens. And then there are the plain facts that Democrats find completely unimportant: that illegal immigration costs the US taxpayer $116 billion and it leaves our country open to those who mean to harm us and our children.

Legal Americans dream too. But the Democrat Party doesn’t care about them, unless, of course, they are minorities, poor, and need something from government. Legal Americans dream that the country will be a decent place for them to live and that when they finish their education, find a job, build a career, start a family, and live a good and decent life that government won’t plunder their paychecks to subsidize those who can’t and won’t provide for themselves. Those who are citizens of the United States are guaranteed the “opportunity” to live the American Dream. That opportunity is increased the more the individual has some resources and is willing to get the education and use the ambition to seek it. That’s all they – we – are guaranteed. Our legal DREAMers want that opportunity – not reduced because others, not even entitled, are being offered it too. Those here illegally, no matter how they got here and no matter how heartbreaking the situation, are not ENTITLED to anything.. not to automatic citizenship and not to the American Dream. They MAY apply to become a legal citizen.

Legal citizenship comes with certain rights and privileges, such as protection under the US Constitution and access to our education and social programs, including healthcare. It also comes with a burden – a citizen must pay federal incomes taxes and live according to all the laws of the land, federal and state. Illegals want the best of both worlds – protection under our laws and access to education and social programs, but without the obligation of obeying our laws.

For those who are unclear as to what the term “DREAMer” stands for, it refers to those individuals, aged 18 or younger, who came to this country by their (illegal) parents. Because they came here through no fault of their own and have come to think of the United States as their home, Democrats (and Republicans like Lindsey Graham) have sought a plan to establish a path to citizenship for them, known as the DREAM Act. Since 2001, Democrats have tried to pass a Dream Act but have never been successful in doing so. In 2012, President Obama was frustrated that Congress would not give him a bill, as he demanded, and so, as he promised, he used his pen to create an equivalent program. He signed an Executive Order creating the Deferred Action for Childhood Arrivals (DACA), a program that gave the head of Homeland Security the discretion to protect them (as a class) from deportation. DACA, even though it was an unconstitutional exercise of presidential power, must be renewed every two years, and President Trump has announced he would not renew it. Hence, the outcry from Democrats for a DREAM Act – a law protecting them by providing them a path to citizenship (amnesty).

Nancy Pelosi stands for everything ordinary Americans stand against. Every time she opens her mouth, she makes the case that our government is comprised of a bunch of useless bunch of individuals who care more about the longevity of their party than the longevity of our country. She is profoundly offensive.

Equally offensive are the protests of DREAMers and other illegals in response to the proposed Immigration plan that President Trump released on Thursday. Guaranteed citizenship (amnesty), albeit according to a 10-12 year timeline, is not good enough for them. Being protected under this plan from deportation is not good enough for them. I see Democrats are creating yet another class of ENTITLED individuals. God knows we already have too many of them of that kind already.