Posted on September 15, 2012 by forloveofgodandcountry

On Tuesday, September 11 (the 11th anniversary of the barbaric attacks on the US), tensions grew in Cairo, Egypt, apparently over a short provocative anti-Islamic video portraying the prophet Mohammed in a negative light (accusing him of being a womanizer, pedophile, and a fraud).  At 6:30am EST, the US embassy there released a statement:  “The Embassy of the United States in Cairo condemns the continuing efforts by misguided individuals to hurt the religious feelings of Muslims – as we condemn efforts to offend believers of all religions. Today, the 11th anniversary of the September 11, 2001, terrorist attacks on the United States, Americans are honoring our patriots and those who serve our nation as the fitting response to the enemies of democracy. Respect for religious beliefs is a cornerstone of American democracy. We firmly reject the actions by those who abuse the universal right of free speech to hurt the religious beliefs of others.”   This statement was released before protesters stormed the embassy there and before the attack on the diplomatic team in Benghazi. A statement by a US embassy reflects the official policy of the US State Department.

About four hours later, crowds began to form in Cairo. They shouted “We are all Osama bin Laden!” and “Obama, we are here to sacrifice for Osama!”   Over the next several hours, the protesters, becoming a mob, stormed the embassy compound.  They made their way into the courtyard of the embassy, tore down the American flag, ripped it up and burned it. They then raised their own flag, a black Islamic flag with the words of the shahada, which is the Islamic creed which reads “There is no god but Allah, and Mohammed is his messenger.”  In fact, black Islamic flags were flying everywhere.

There was a reason the protesters used black flags. The black flag was the personal flag of Muhammad. Known as Al Uqab or the Eagle, this large black banner was said to be made from the headscarf of his wife, Aisha. Although he had a smaller white flag, commonly known as the Young Eagle, the black flag was the one used most frequently throughout his life and his conquests. This flag flew during the conquest of Mecca and continued to be a powerful symbol of Islam during the rule of the Abbasid Caliphate following Muhammad’s death. The black flag is an integral part of Islamic symbolism and remains one of the only permissible symbols evoking the Prophet Muhammad and the early days of Islam.  And so, while the protesters gathered to show outrage over the independent film and its accusations against Mohammed, the black flag was significant.

About 3:30pm EST, according to the Washington Examiner, the US Embassy in Cairo tweeted, “This morning’s condemnation still stands, as does our condemnation of unjustified breach of the Embassy.”   Apparently, even up until 6:30pm, twelve hours after the original statement, the Embassy was still tweeting and standing by its official position.

That night in Libya, militants attacked the US embassy in Benghazi, destroying the compound with hand grenades, rocket-propelled grenades, and automatic weapons. They would eventually kill our ambassador to Libya, Chris Stevens, computer expert Chris Smith, and two ex-Navy Seals who provided security – Glen Doherty and Tyrone Woods.  Stevens was separated from his security detail by thick smoke and US officials were unable to account for his whereabouts until his body was identified.  The first of our men to be found dead was Sean Smith when US security forces went thru the demolished and burnt embassy compound building. He died of smoke asphyxiation. Secretary of State Hilary Clinton would confirm his death at 10:08pm. The news of the death of Stevens and the two others was not announced by the U.S. government until after 7:00am on Wednesday, September 12, after his body was recovered and delivered to a nearby hospital. It was reported that Stevens likely died of asphyxiation and that Doherty and Woods were killed by militant gunfire. 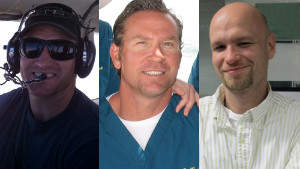 Sometime before the deadly attack in Benghazi, the tweets from the US Embassy were deleted from the twitter thread.  Moments after Clinton confirmed the sad news about Sean Smith on Tuesday night, the White House issued a statement disavowing the apology by the US Embassy:  “The statement by Embassy Cairo was not cleared by Washington and does not reflect the views of the United States government.”

At 10:24pm on Tuesday night, Mitt Romney took an opportunity to issue this statement: “I’m outraged by the attacks on American diplomatic missions in Libya and Egypt and by the death of an American consulate worker in Benghazi. It’s disgraceful that the Obama administration’s first response was not to condemn attacks on our diplomatic missions, but to sympathize with those who waged the attacks.”

Of course, Romney was attacked and criticized for what he said but Obama, who never condemned the actions of the terrorists, was coddled by the press.  In fact, members in the liberal press conspired to attack Romney on his position and to try to corner him into making a statement that might hurt his credibility.  Ah, how the left conspires…

The following day, Wednesday, Obama chose to miss a briefing by the Defense Department regarding the ongoing drama in Benghazi and the attacks on other American embassies in order to attend a campaign event in Las Vegas.

Obama’s pitch for re-election went on as scheduled, even though tensions were continuing to grow in the Middle East and government officials were trying to find out who or which groups were responsible for the deaths of the 4 American diplomats and servicemen.  He told the crow: “We’ve had a tough day today.  We lost four Americans last night, who were killed when they were attacked at a diplomatic post in Libya.  And they were serving overseas on our behalf, despite the dangers, despite the risks, to help one of the world’s youngest democracies get on its feet.  They were working to advance the interests and the values that we hold dear as Americans.  And as Americans, we stand united -– all of us -– in gratitude for their service, and we are mindful of their sacrifice, and we want to send out heartfelt prayers to their loved ones who grieve today… So tonight, let’s think of them and thank them. I want to assure you, we will bring their killers to justice.”

Not once did he condemn the attacks. Not once did he criticize radical Islam.  But immediately after his short statement about the attack in Benghazi, he reminded his Nevada audience that they are a swing state, made a joke, and then asked for their votes.  He never missed a cue.  And didn’t bat an eye (or hold back a tear).

“What happens in Benghazi stays in Vegas,” as one blogger commented.

As we can be fairly sure, at the time the events were unfolding in Benghazi and in Cairo, Secretary Clinton knew full well that the independent film about Mohammed has even less to do with the protests, the attacks, and the savage killings than did the Danish cartoons or the schoolteacher’s teddy bear or any of the other insults of Islam. The 400-strong assault force in Benghazi showed up with RPGs and mortars. That’s not a spontaneous movie protest; that’s an act of war.  And it was better planned and executed than the dying superpower’s response to it. Secretary Clinton and President Obama are misleading the American people when they suggest otherwise. We are in a war against Islam.  Maybe not against those who want to live in peace, but certainly the militant, fanatical faction.

On Wednesday morning, as Obama was getting ready for a day of campaigning, doing a spot on David Letterman, and making an appearance on a hip-hop radio show hosted by “The Pimp with a Limp,” Mitt Romney went on TV to say a few remarks:

“It is with tragic news and heavy hearts that we consider that individuals who have served in our diplomatic corps were brutally murdered across the world.

This attack on American individuals and embassies is outrageous. It’s disgusting. It breaks the hearts of all of us who think of these people who have served during their lives the cause of freedom and justice and honor. We mourn their loss and join together in prayer that the spirit of the Almighty might comfort the families of those who have been so brutally slain.

Four diplomats lost their life, including the U.S. ambassador, J. Christopher Stevens, in the attack on our embassy at Benghazi, Libya. And of course, with these words, I extend my condolences to the grieving loved ones who have left behind as a result of these who have lost their lives in the service of our nation. And I know that the people across America are grateful for their service, and we mourn their sacrifice.

I also believe the administration was wrong to stand by a statement sympathizing with those who had breached our embassy in Egypt instead of condemning their actions. It’s never too early for the United States government to condemn attacks on Americans and to defend our values. The White House distanced itself last night from the statement, saying it wasn’t cleared by Washington, and that reflects the mixed signals they’re sending to the world.

The attacks in Libya and Egypt underscore that the world remains a dangerous place and that American leadership is still sorely needed. In the face of this violence, America cannot shrink from the responsibility to lead. American leadership is necessary to ensure that events in the region don’t spin out of control. We cannot hesitate to use our influence in the region to support those who share our values and our interests.

Over the last several years we stood witness to an Arab Spring that presents an opportunity for a more peaceful and prosperous region but also poses the potential for peril if the voices — forces of extremism and violence are allowed to control the course of events. We must strive to ensure that the Arab Spring does not become an Arab winter.”

While we would hope that those who put out something for public consumption would use common sense, a degree of sensitivity, and a sense of decency, none of those are required as conditions for the exercise of our First Amendment liberties.

The bottom line is that we cannot allow acts of terror, based on the very intolerance that they accuse us of, to act as a veto on the exercise of our constitutional liberties.

***  I offer my deepest condolences to the families of Chris Stevens, Glen Doherty, Tyrone Woods and Sean Smith.  I am saddened that they had to die because of the reckless act of an amateur filmmaker and the soft policies of a government that thinks appeasement is a proper response to terrorism.  Their smiling faces will remind me of the happiness they enjoyed as Americans and the pride they felt in serving a country they loved and believed in. My daily prayer will continue to be that fellow Americans will be safe in the violent nations of the Middle East and no other mother’s heart will ache because of a life tragically cut short on account of hatred and intolerance.

I'm originally from New Jersey where I spent most of my life. I now live in North Carolina with my husband and 4 children. I'm an attorney
View all posts by forloveofgodandcountry →
This entry was posted in Uncategorized and tagged 9/11, Benghazi, Cairo, Chris Stevens, libya, Mitt Romney, Obama, Politics, Sean SMith. Bookmark the permalink.